I’m tag-teaming a Song of the Day along with a bit of good, old fashioned log-rolling today. The song is a previously unreleased acoustic version of ‘On The Radio’ Kate Tucker and Mark Isakson layed down for Seattle’s Bumbershoot festival last year. The log-rolling is explained below…..

Kate has finished recording White Horses, her new solo album, but she need a bit of help. Being an indie artist often means little details like coming up with the last few bucks to press CD’s, promote the album and loading up the tour bus sometimes force her to employ extraordinary measures…in this case, hit up folks on the internet for whatever they might be able to contribute! Kate has put together a Kickstarter Funding Video…complete with ‘prizes’…in order to raise the final $5000.00 she needs to put White Horses to bed. If you toss her a few measly bucks you can get a signed CD and a bit of good Karma…for 50 bones she’ll unlock the vault and give you her bootlegs from her first album, the out of print Eros Turannos, and a few more goodies…$500 and she’ll record an acoustic version of any of her songs, dedicate it to you, post it on YouTube, and send you an exclusive mp3…..and for you seriously High Rollers, a grand will get Kate to play a concert for you and 40 of your closest & dearest friends (!)…two grand and she’ll sing for you, and cook you dinner and get you drunk (!!)…and if somebody were to kick in the whole five grand…well, I think it goes without saying that if anybody hits that target, Kate’s gonna have a friend for life!!! (Or it means she sold herself into slavery…I’m not quite sure…..)

I’m asking all of the friends of The List to head over to ‘Put Your Money Where Your Heart Is! Kate Tucker Sings for Her Supper!’ and watch the Kickstarter video…and if you can, show her a little love. And then pass it along to a few friends. It’s a lot more interesting than those damned LOLCats videos that keep filling up my inbox! And let’s be honest…the more true artists like Kate out there might mean we have to endure less of Lady GaGa…!!!

Check out more of Kate Tucker on MySpace 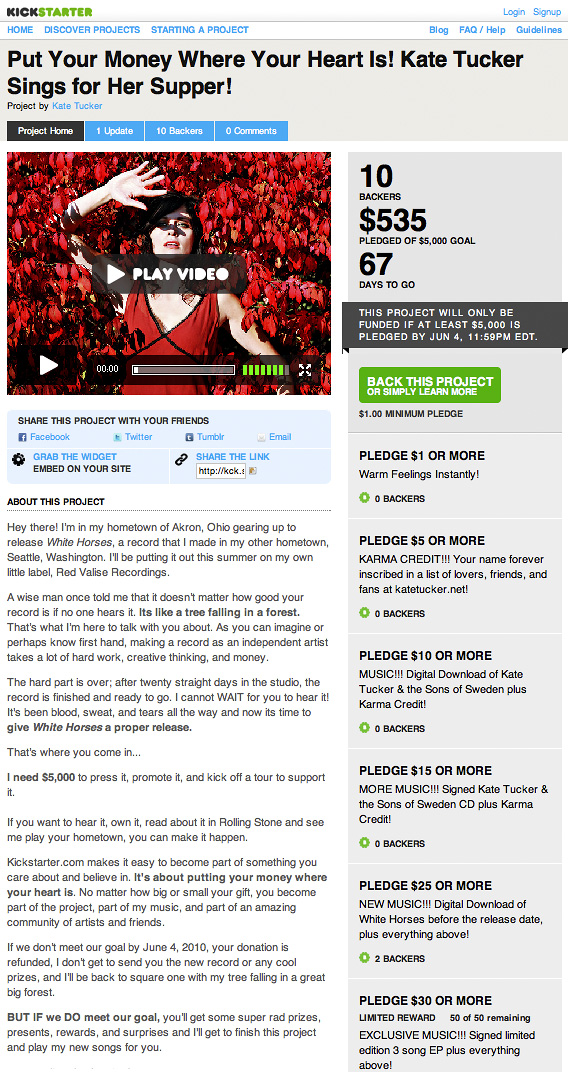